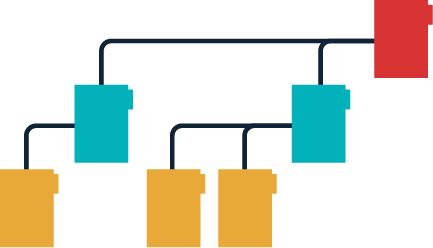 Oftentimes content is tagged with metadata fields that are dependent on one another. An example of this kind of metadata would be Country, State, and City. When indexing content tagged in this manor with Mindbreeze, each of those metadata fields are independent of one another. This means if we wanted to use those metadata fields as facets, they would also be independent of one another. To drive a better search user experience, it is possible to combine those metadata fields into a single hierarchical metadata field at index time. With a hierarchical field, the facets would be nested within each other, meaning the states would only appear once a country is selected, and the cities would only appear once a state is selected. In Mindbreeze, hierarchical metadata can be created using Precomputed Synthesized Metadata. Precomputed Synthesized Metadata allows us to create or edit existing fields with functions known as Property Expression Language. In this example we will be using “split_path” and “concat”, but the entire list of functions can be found on this Mindbreeze webpage.  To create our hierarchical metadata, we first concatenate Country, State, and City together appending a separator in between each. We will choose a slash to be our separator as it doesn’t appear as a value in any of our metadata. Next, we will split our concatenated string on our separator to create a multi-valued metadata field. Our final property expression would look as follows: split_path(concat(Country, “/”, State, “/”, City), “/+”) The following screenshot shows our entire Precomputed Synthesized Metadata configuration:

We use a similar hierarchical filter structure within our Oracle WebCenter content management instance that uses Mindbreeze, and our Mindbreeze Inspire Connector for WebCenter, to help users leverage filters to find content items. The following screenshot shows how you can filter the results for “mindbreeze blog posts” by selecting the year, 2020, and the month, March. This happens to be all the content we are providing you in our Enterprise Search newsletter ?. By applying this configuration change to your Mindbreeze search system, you too can use your metadata fields as facets to create a better search-based navigation for users to find the content item or items they are looking for.